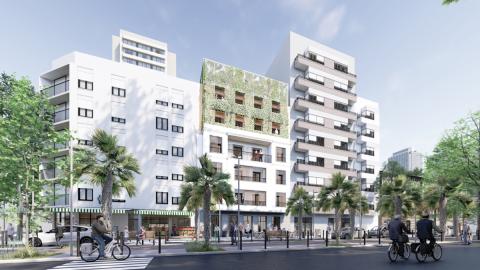 «The word "Conlloga" is a reference to a native term in the north of the Valencian Community that had been known almost disused and used to designate a group of people with common interests and solidarity, which also means friendly company or sympathy tie. »

Solidarity with the neighborhood

Conlloga is a commitment to the recovery and community revaluation of the cultural and built heritage of our cities from a social, economic and environmental perspective.

The proposal is implemented in a consolidated context: Capuchinos Avenue of Castellón, the axis of the walk towards the city center, a route through the historic Sèquia Major and the identity pattern of urban growth outside the city walls. Also a road that welcomes a generational change in one of the most esteemed areas of the city that will enter into a process of having new neighbors from different origins, after almost a century of the first buildings.

In order to favor the community insertion of future tenants, three actions are proposed:

- A “masovera person” is incorporated, who lives in the building itself and contributes to its social dynamization and its articulation with the interests and needs of other neighborhood communities .

- The ground floor hosts a collaboratory in the field of housing and energy rehabilitation, preferably of public advocacy and public-community management.

- The production, management and distribution of different environmental resources shared with neighboring buildings be coordinated, to promote mutual support and reciprocity between co-inhabitants.

In short, an ecosystem of an urban regeneration model is proposed for consolidated neighborhoods where the residential stock must adapt to new models that reflect all dimensions of Housing Equity. 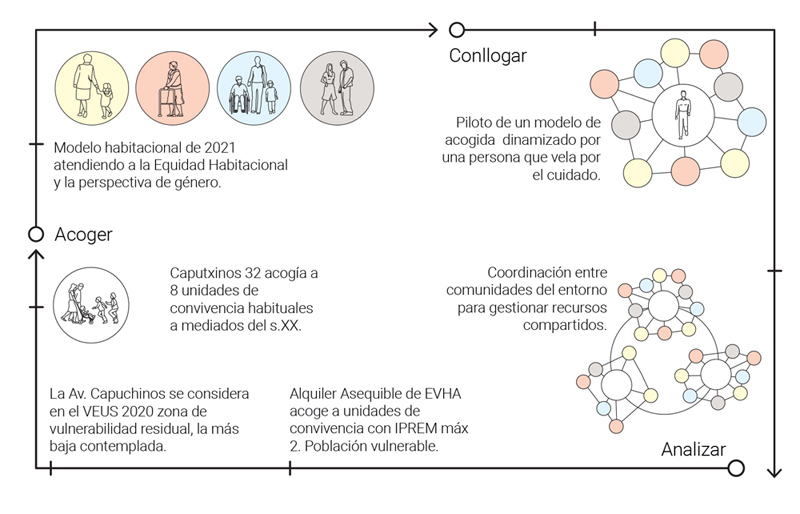 The design and distribution of the functional scheme accompanies participatory management and community social life to make the nap and the party compatible. It is based on:

- Participatory self-management models. The project opens up the possibility of involving residents in the construction, modification and management of any aspect related to the useful life of the building.

- Collectivization of goods and services. The possibility of connecting with nearby buildings is being studied to share resource generation and distribution systems. 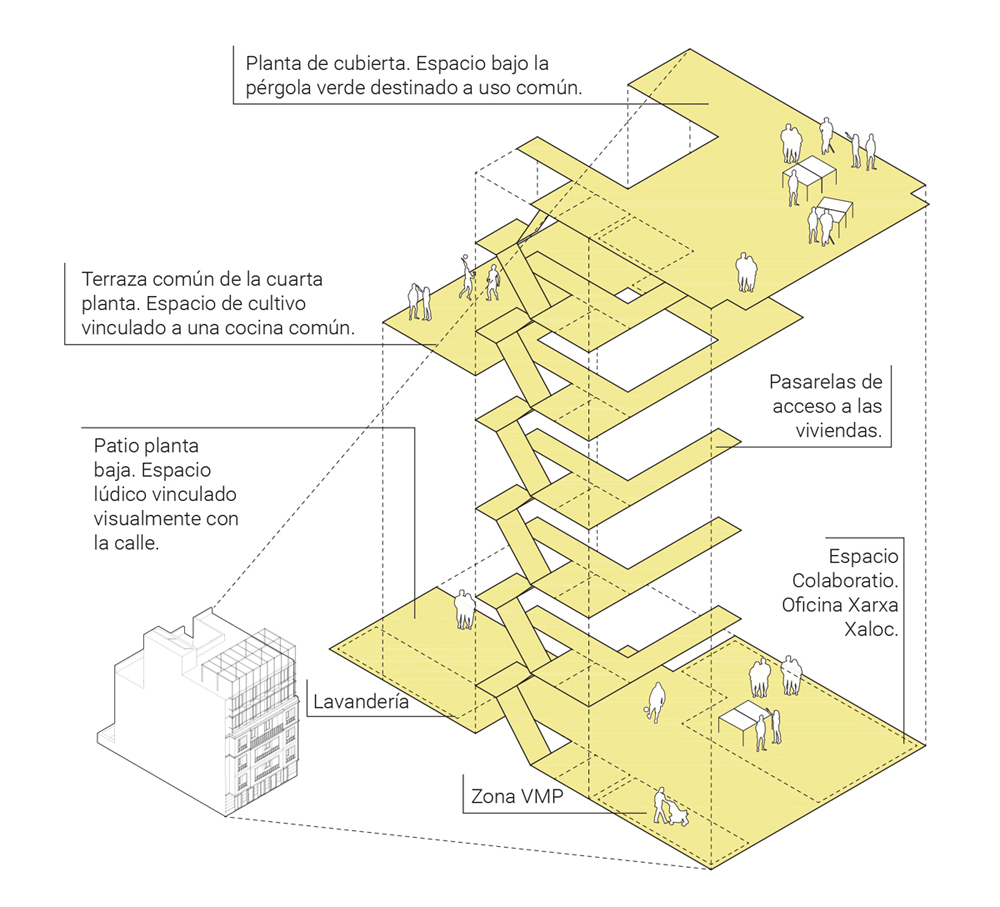 The ground floor is conceived as a visible, accessible, safe and well ventilated space, open to the street. It works as the extension of the public space, with a little more privacy, to be able to continue playing, chatting and weaving life together. It also has a covered space facing the block patio that can combine recreational uses, such as games and informal meetings, with domestic tasks, such as washing clothes. 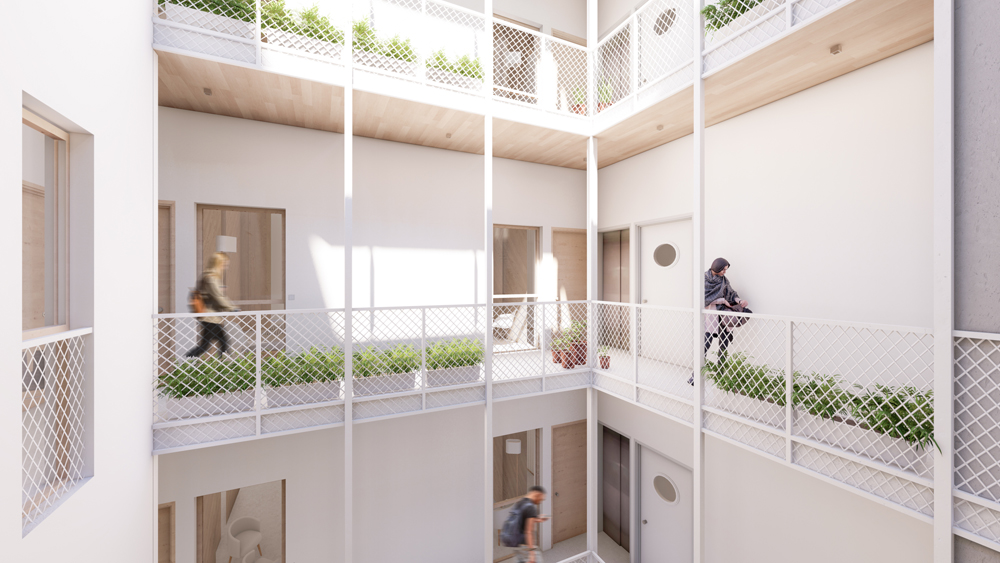 As for the rest of the building, it was decided to concentrate the usable common areas in the spaces with the highest environmental quality: multipurpose room and terrace on the 4th floor and the roof terrace linked to the green pergola with various uses. They are considered to be the ideal places to hold celebrations or any action related to gardening or participatory cultivation, promoting cohesion between co-inhabitants. In addition, as it is an outdoor space or an interior space, the possible noise generated is minimized in the common areas, which are linked to the houses and the central patio, in addition to facilitating the compactness of the spaces intended for housing, thus promoting energy efficiency. 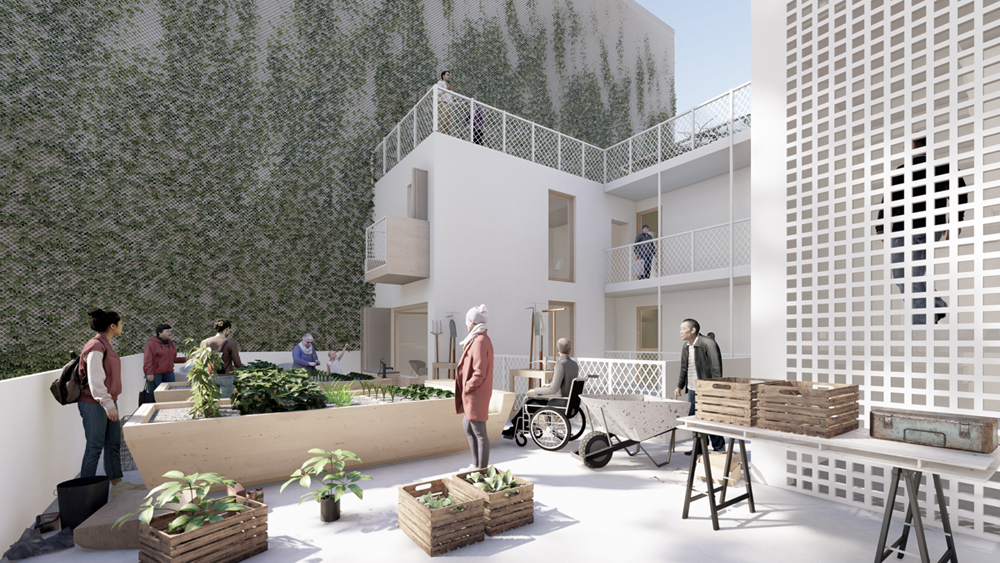 Affordable housing for the social mix

The regime of the building use will be for public housing, mostly for affordable rent, with a high rotation, which should be taken into consideration in the project phase and in its construction, especially foreseeing easy to maintain and replace construction units that are suitable for this purpose. Household distributions avoid deterministic and exclusive distributions that do not take into account the diversity of real households. In this way, they respond to the needs of households with few resources, especially affected by emergencies that have occurred by the COVID-19 crisis, of multi-nuclear households with children or dependents, of young people, of migrants, of elderly people living alone, victims of gender violence, people with functional diversity or people who access the affordable rental program. 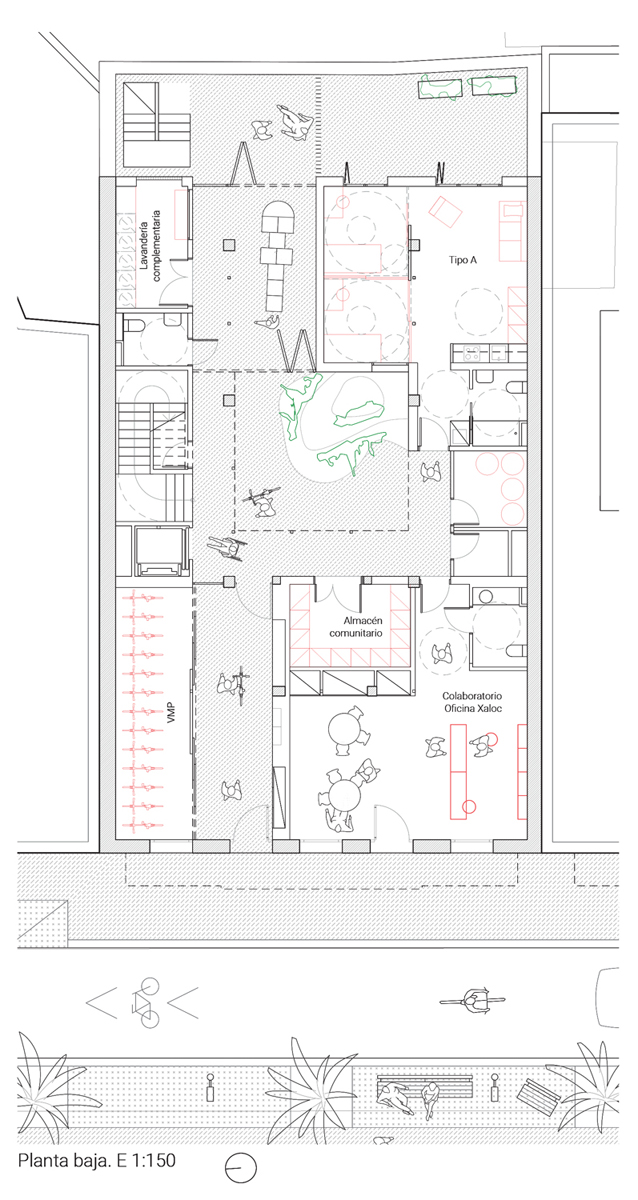 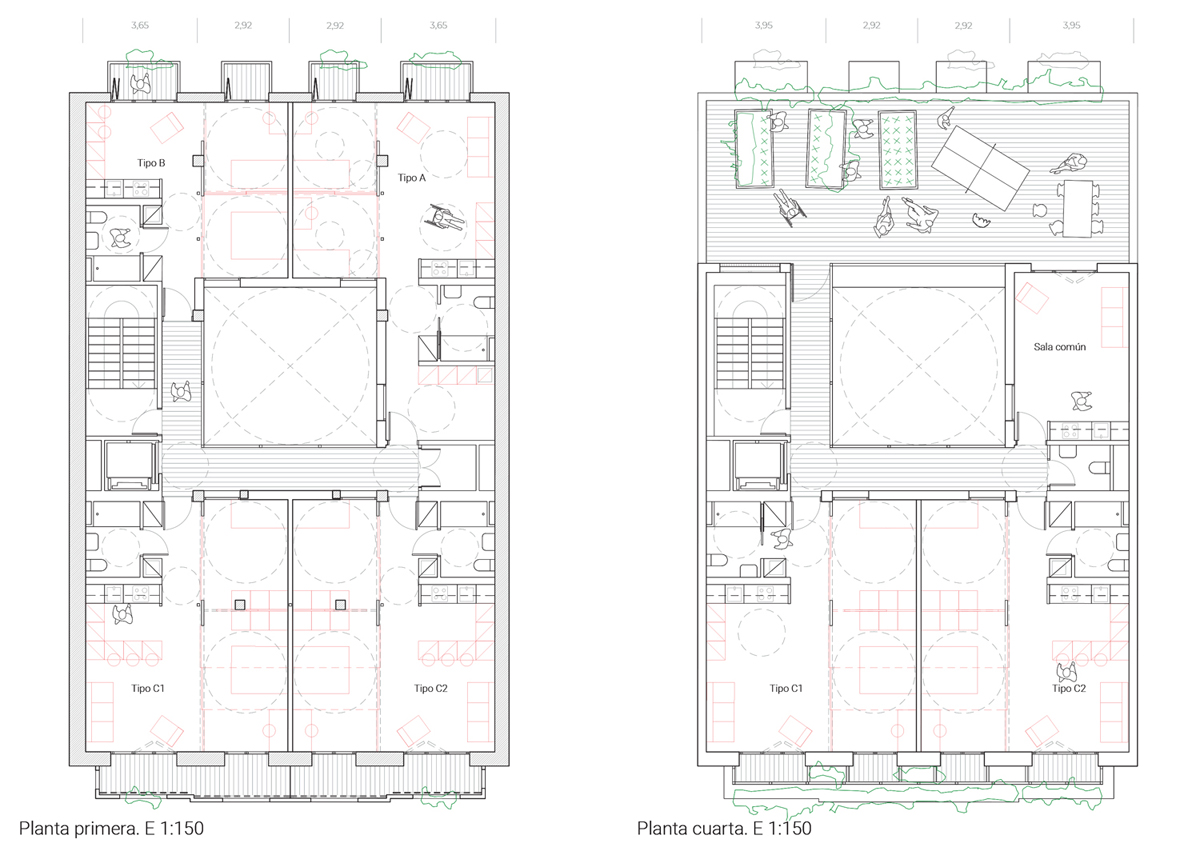 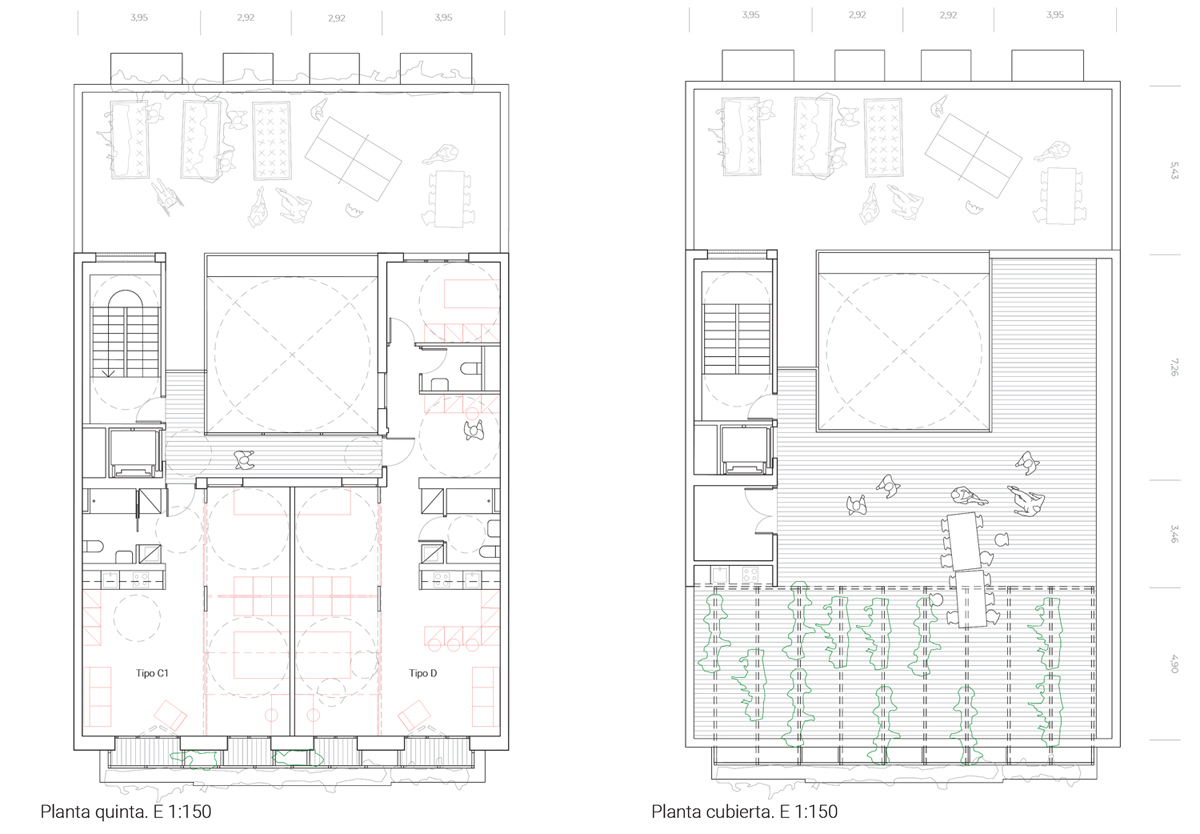 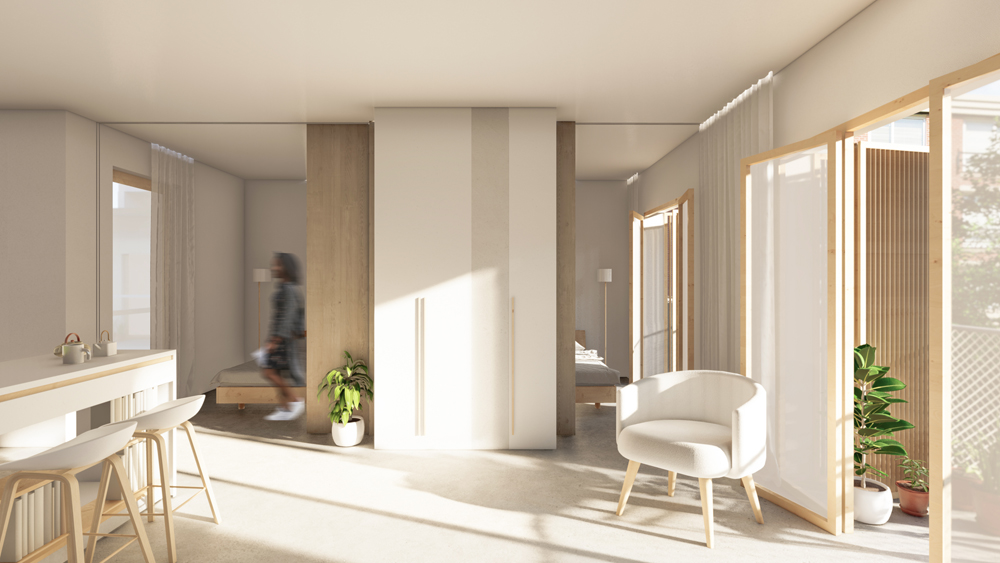 Typological diversity with a gender perspective and accessibility

In favor of the plurality of the ways of appropriating space, functional distributions are opted for versatility. The fixed equipment modules (bathrooms) do not interfere in the area of flexible rooms with specific occupation. Any home can easily be converted into a community space. Any home can become a space for collective or adapted use due to the easy modification of the wet module. The absence of rigid distribution makes it much easier. Against the functional determinism of traditional heteropatriarchal distributions, they opt for configurations sensitive to the gender perspective. Functional spaces, such as laundry rooms or kitchens, and living spaces are put on the same level. The central and connected situation of the kitchen facilitates the tasks of care, since it allows the caregiver to be next to the dependent. 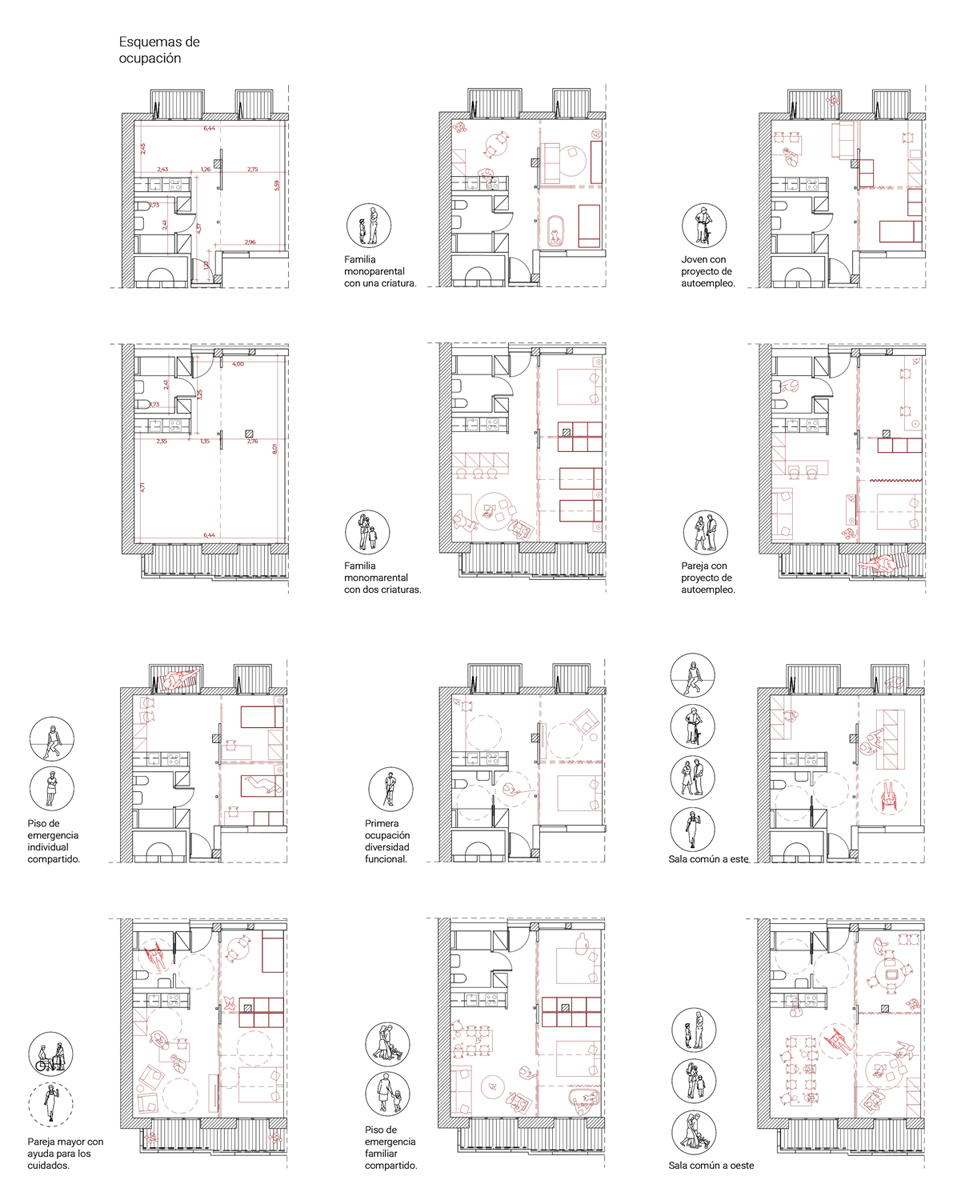 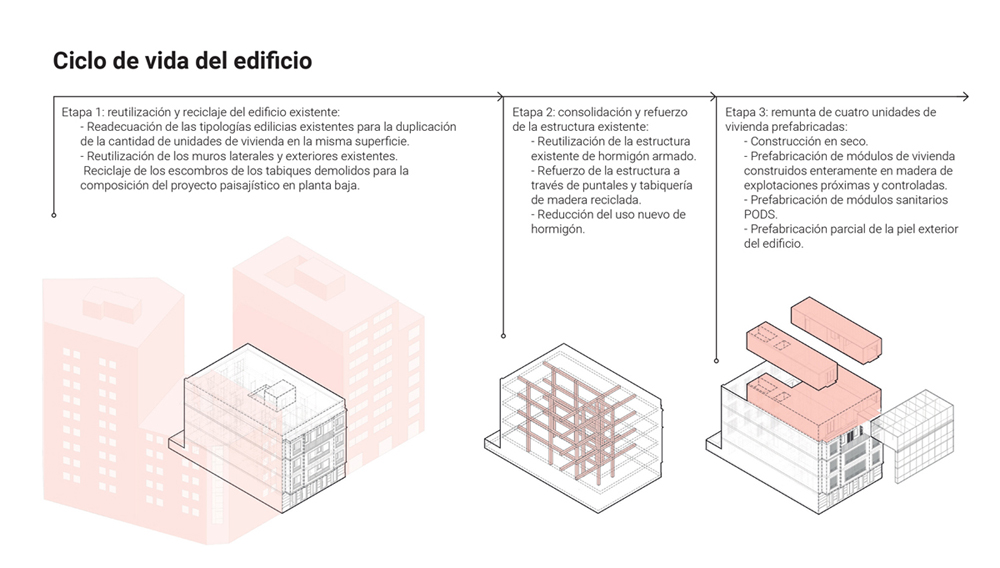 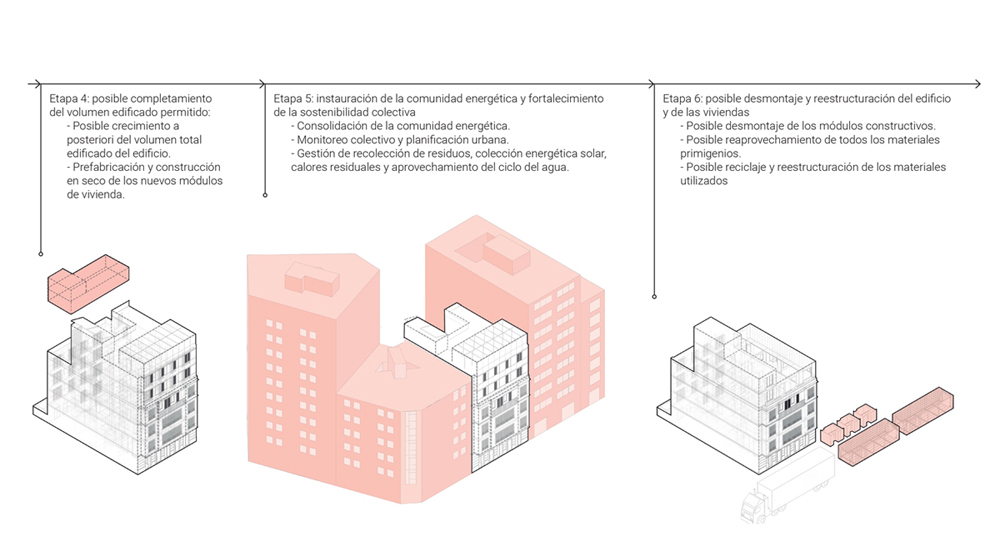 Maximum use and respect for what exists. The current structure must be reinforced, since it is in poor condition and does not comply with current regulations. Instead of reinforcing by increasing sections as usual, an alternative intervention is proposed. The bearing capacity of columns and beams is not increased, but their loads are reduced. For this, supports are inserted in the spans, so that the spans are reduced and the existing pillars are unloaded. The resulting solution is halfway between heavy structures, based on columns and beams, and light ones, of the balloon frame type. The new structural frame defines the distributions of the houses. In the same spirit, the floor joists are relaxed thanks to the addition of a connected compression plate. Similarly, the current foundations are maintained because their loads are reduced. The added supports are reinforced by new superficial foundations —floating beams, slab— or, if the characteristics of the soil require it, deep —micropiles—. 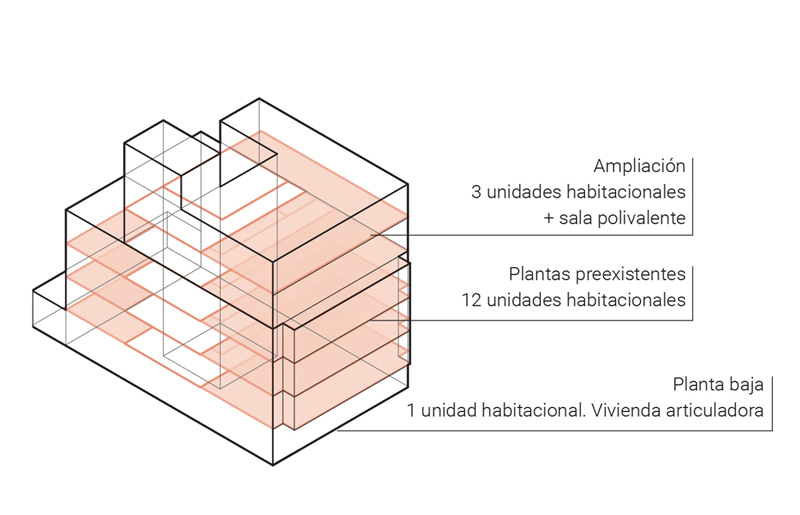 The existing building is traced using two-dimensional and three-dimensional prefabrication techniques. The added components are lightweight frameworks of columns and beams whose loads are distributed over a large number of supports. Fast and light, this solution is perfectly suited to the proposed reinforcement for the existing structure. Its advantages are manifold. To begin with, the current structure remains visible and useful, taking advantage of its bearing capacity. Furthermore, the proposed alternative is simpler than the usual cladding solution. Finally, the simultaneity of the prefabrication and the interventions on the existing building allows to reduce the execution times. 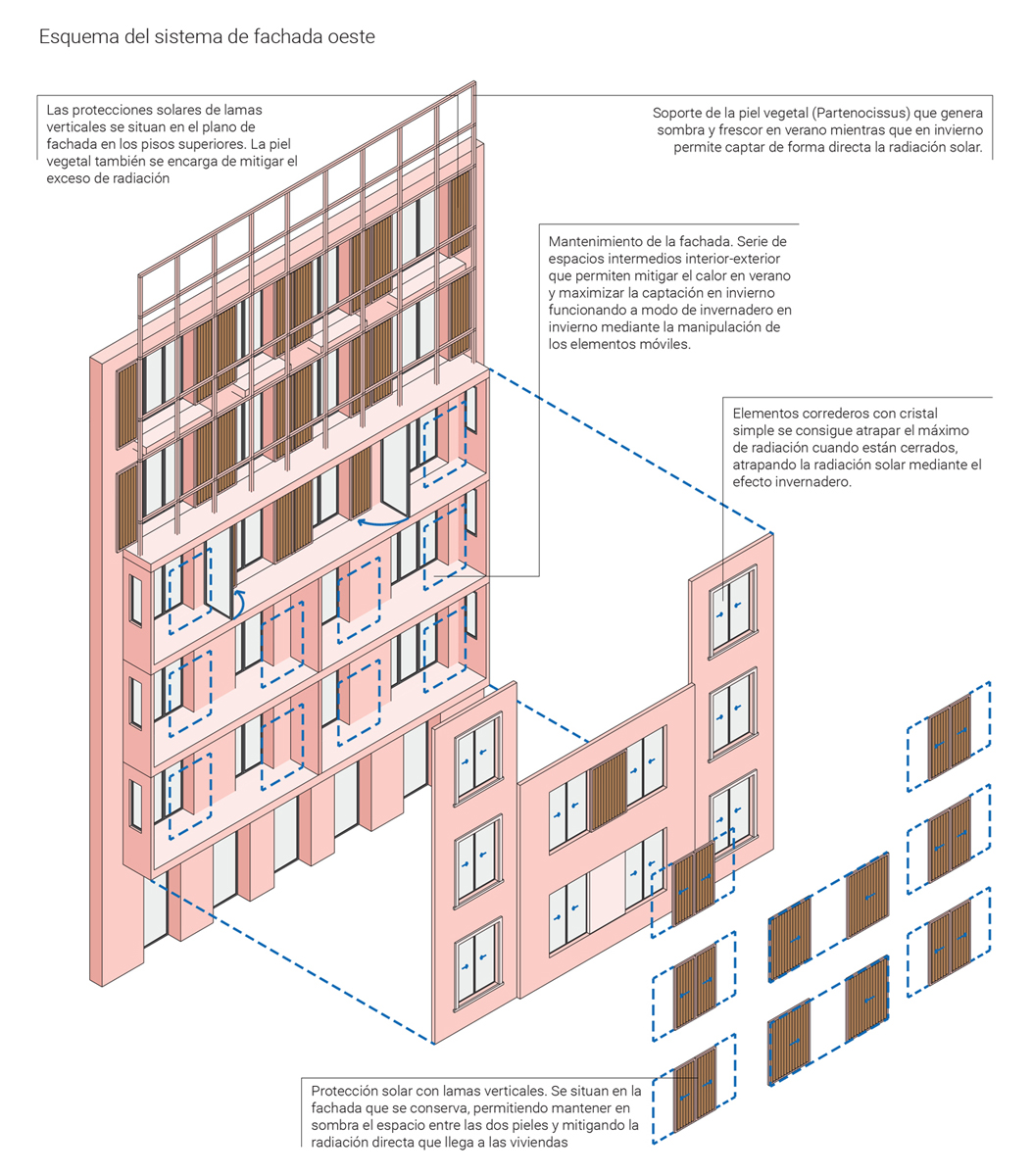 The use of lightweight and dry prefabricated modules, both two-dimensional and three-dimensional, greatly favors the dematerialization of the construction compared to conventional systems. On the one hand, the use of recyclable materials is increasing, such as wood and vegetable fibers, or recycled materials, such as steel. On the other hand, it is committed to the reuse of construction elements at the end of their useful life thanks to modulation, dry and reversible joints, consideration of future uses and BIM traceability. Both the three-dimensional modules of the two upper floors, which are load-bearing, and the sanitary cores of the existing plants will be manufactured in the workshop. The same will happen with certain two-dimensional components of the renovation or extension, whether they are interior partitions or facade cladding. Manufacturing in the workshop optimizes the quality of finishes and the consumption of materials, apart from reducing waste, execution times and inconvenience to neighbors. In addition, it improves the working conditions of the people involved and facilitates the incorporation of women into the construction sector. On the other hand, it favors R + D + I in this sector, especially with regard to rehabilitation, since it introduces new materials and processes. The work period has been calculated in 10 months. The important economic savings must be taken into account as a result of the reduction of the work process. 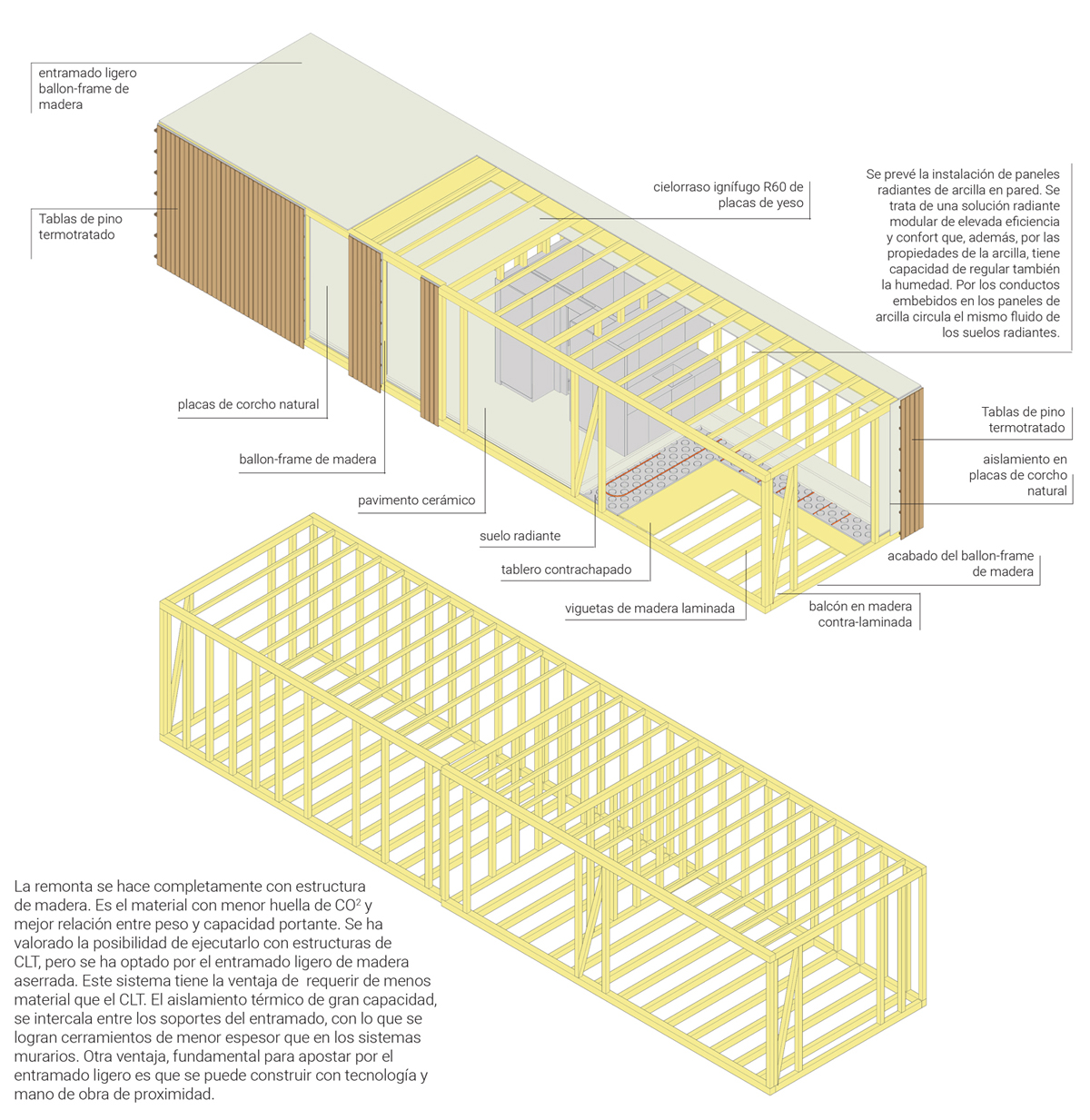 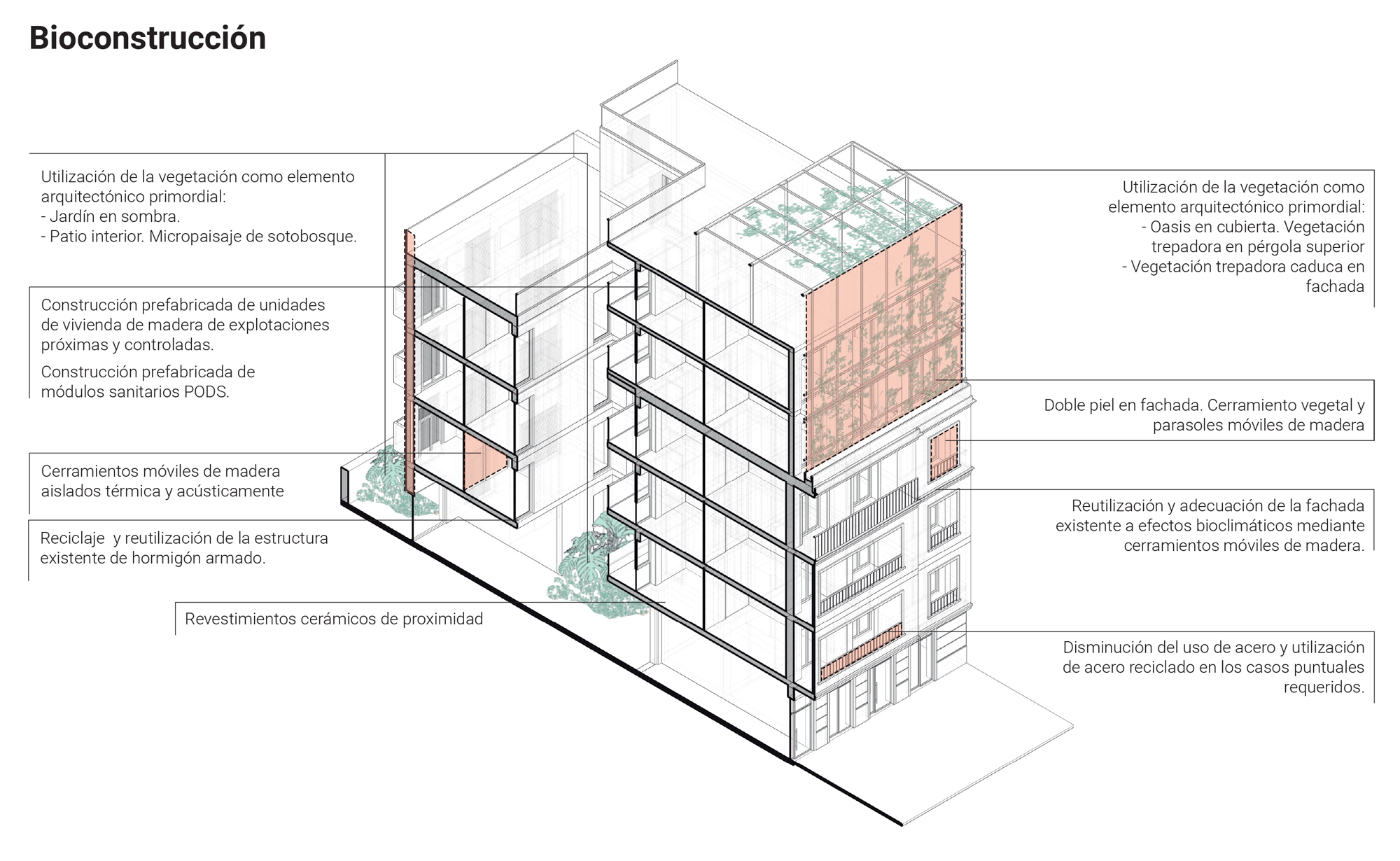 BIM and BEM tools at the service of decarbonisation

The sustainability of the entire action will be measured with the BIM (Building information modeling) tool of the European Commission Level (s), which quantifies energy consumption, CO₂ emissions, solid waste generation, toxicity and the closure of material cycles, both in the production of components and in their circular management. This will guarantee the reduction of environmental impacts and their traceability, maximizing the use of recycled materials and renewable energies at the beginning of the life cycle, as well as recycling and reuse at the end of it. More than as a tool, BIM will be used as a methodology that combines architecture with environmental engineering, structural expertise, restoration, economic-financial viability or property maintenance. Through the LEAN Construction method, those responsible for each of these fields will be identified and the fulfillment of their respective objectives will be monitored. The BIM monitoring will be extended to buildings throughout the block in order to improve energy use through the comprehensive management of data related to orientation, sunlight, prevailing winds, water consumption, geothermal energy and construction systems. On the other hand, the use of BEM (Building energy modeling) tools will allow dimensioning the building's natural air conditioning, its thermal inertia and insulation, and its hygroscopicity, reflectance or absorbance. Ultimately, both tools will be used to evaluate the savings in materials and emissions compared to conventional construction systems. An impact reduction of 50% in energy and toxicity, 65% in solid waste and 80% in CO₂ and cycle closure is expected. 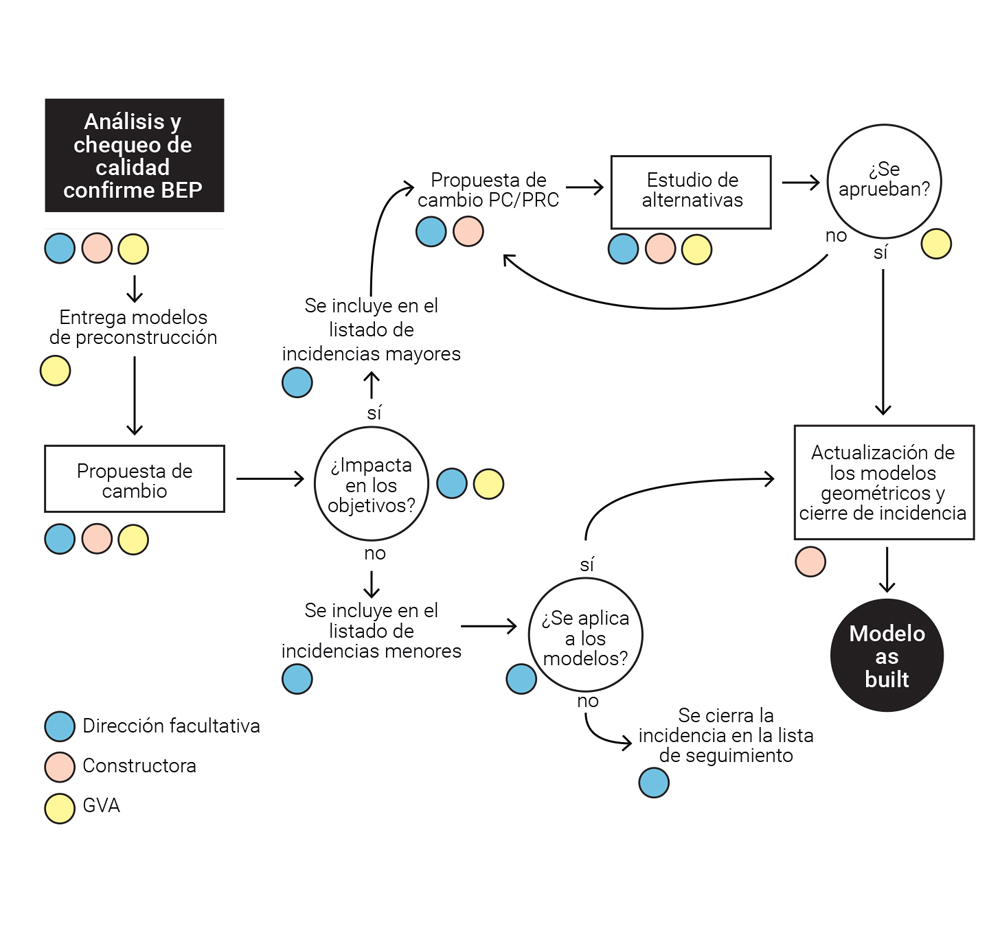 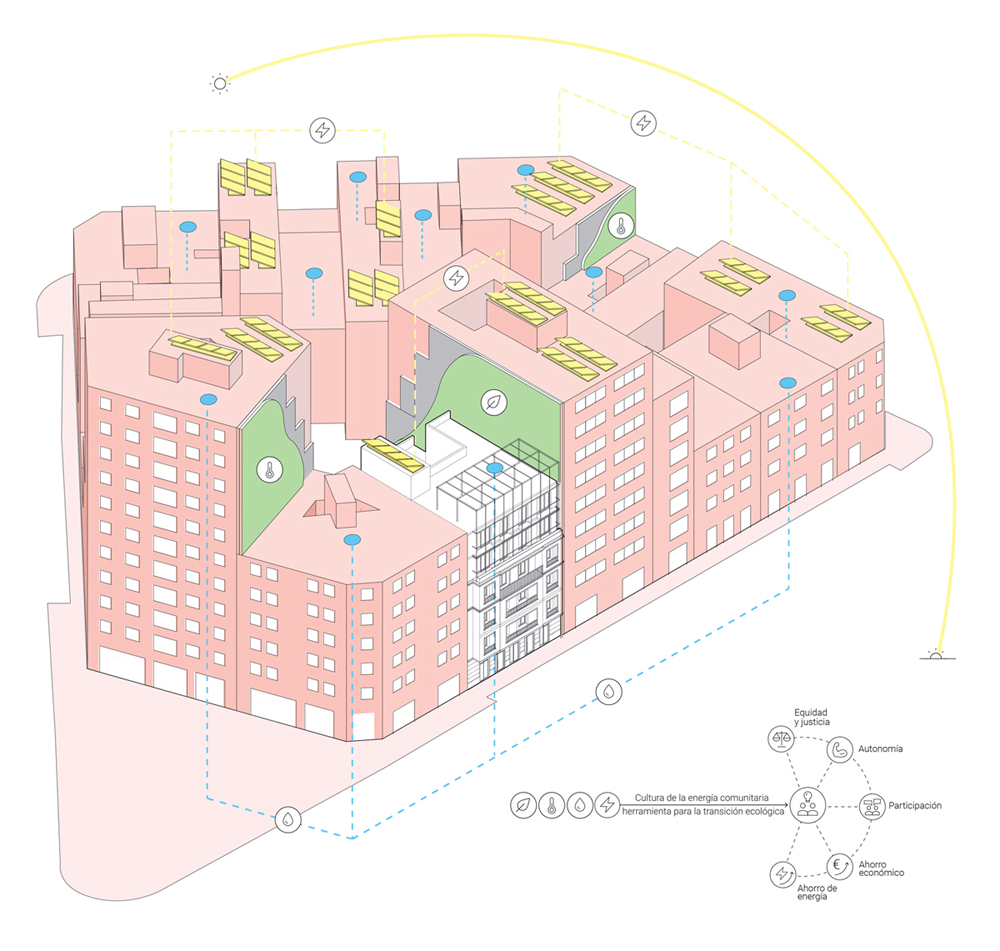 BEMS will regulate and monitor the air conditioning, ventilation and lighting of the building. It will treat the information collected to reflect their patterns of use and pedagogically guide the inhabitants in making decisions for their optimal management. Improving user habits is one of the key measures to reduce economic and environmental costs. To this end, indicators such as network water consumption, reused water consumption, non-renewable primary energy (PE) consumption, total PE consumption, the percentage of renewable energy consumption, the percentage of reduction in EP consumption compared to CTE 2019, maintenance costs, breakdown of energy costs -explanation of bills-, CO2 emissions or the comparison with previous periods -day, week or previous year-. Likewise, a system inspired by the hotel sector or that of assisted residences will be implemented to integrate the control of access to homes with that of consumption. As it is a pilot building, tools will be used that allow the neighborhood community to evaluate the systems, implement new measures and modify those that do not meet expectations. For this, modular cradle-to-cradle solutions will also be used, easily removable and retrievable to facilitate cyclability.

The compactness of the building allows energy consumption for air conditioning to be brought close to zero. Its adaptive envelope preserves heat in winter - thermal insulation - and dissipates it in summer - solar protection through various filters with specific strategies for each orientation, cross ventilation. The thermal inertia of the assembly can dampen thermal jumps between stations. Thus, the most relevant thermal demand will be that of the production of domestic hot water. 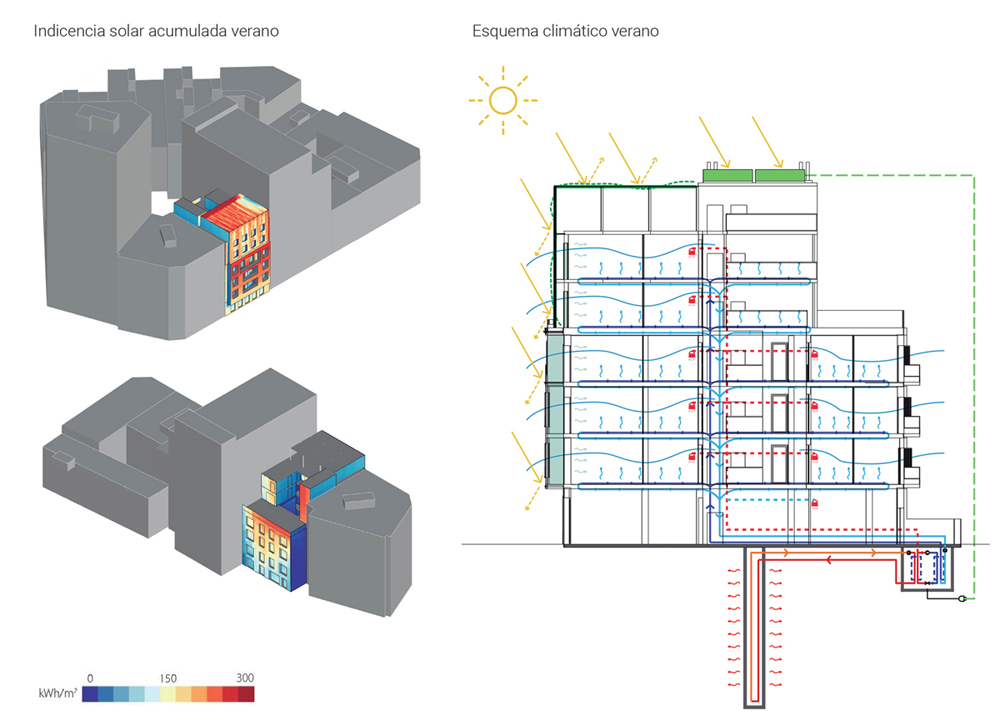 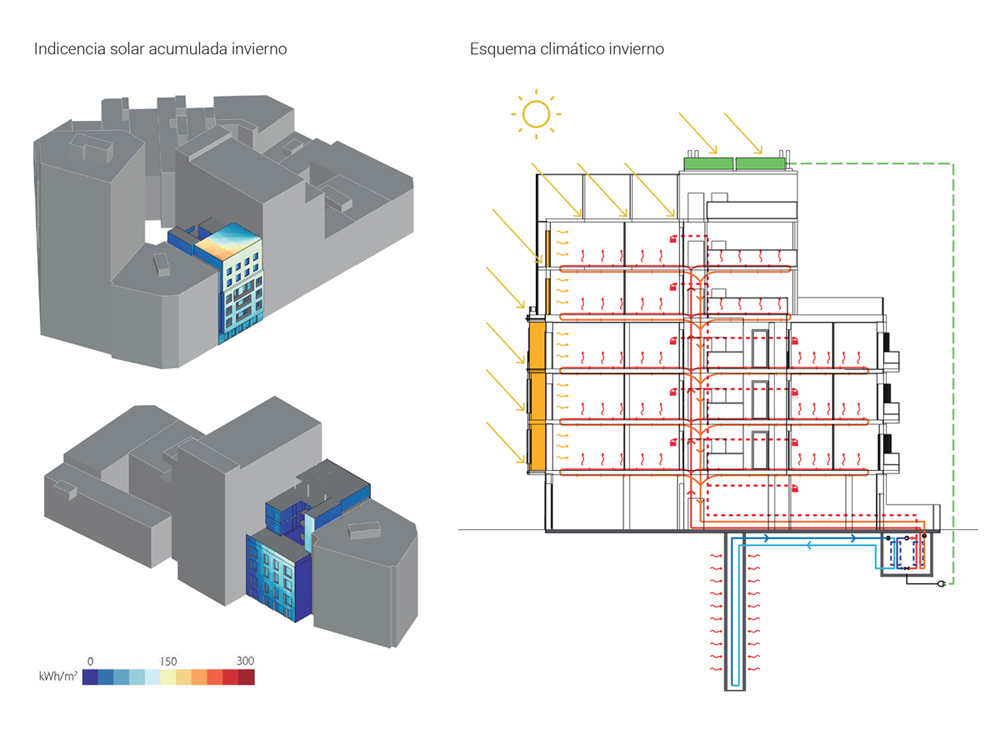 The thermal production of the building will be centralized to integrate photovoltaic generation. Heating, cooling and DHW demands will be covered with a single geothermal heat pump. This highly efficient system will be located in the basement of the inner courtyard of the block, thus freeing up the roof to dedicate it to community uses.

A system of radiant floors and walls fed by geothermal energy will allow the building to be air conditioned, taking into account efficiency, health and hygrothermal well-being. The monitoring of the system and the modular sectorization of the houses will allow optimizing its operation and adapting it to the diversity of situations that may occur in the building.

The building will combine the collection of rainwater with the reuse and purification of gray water, so that all discharges to the municipal sewer system have exhausted their possibilities of use and/or return to the natural water cycle. This will close the cycle of a resource as necessary as it is scarce. 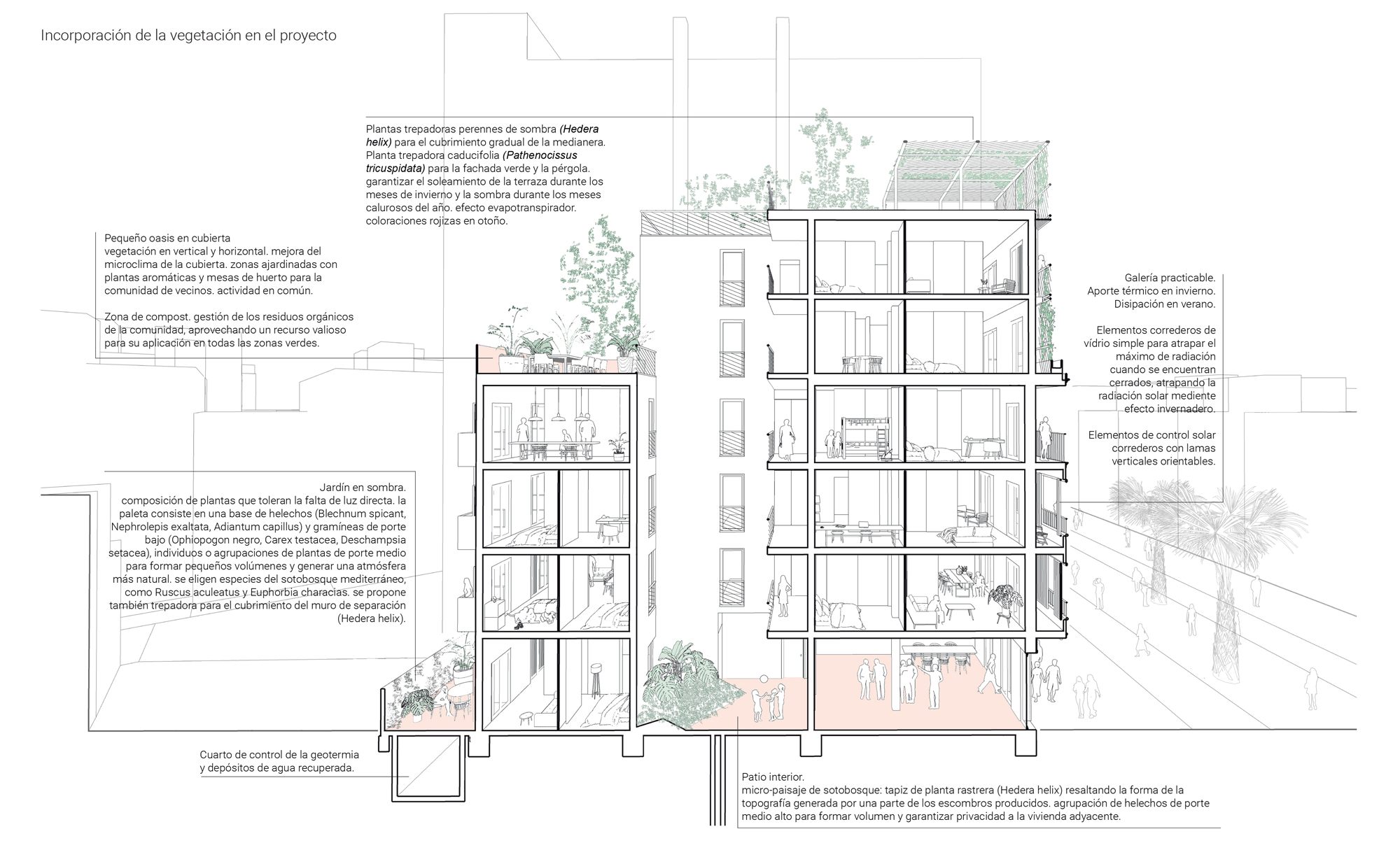