Optimized organization of the work

The #ATRI actions do not take place under conventional conditions of production of new housing, where efficient and proven processes already exist. Instead, we have designed a building methodology optimized for #ATRI's specific characteristics. This methodology can be summarized in a series of four stages:

0. Preparation of support and connections to services:

In terms of support, we will find two large groups of possible situations:

- Acting on a pre-existing fabric: It may be a trace or an insertion, in any case a study of the structural characteristics, accesses and common spaces, facilities, etc., must be done, so as to ensure the compatibility and good functioning of the whole, with the Starting philosophy that the enlargement of the built roof has to imply an integral improvement.

- Reversible installation on an empty space: In the case of actions on disused spaces, it will be necessary to study the use of reversible foundation systems, currently available in the prefabrication market. We have different demountable structural solutions, such as alveolar metal beams used mainly in the stabilization of walls and slopes. The connections of installations will be very similar to those that have permanent character.

#ATRI is committed to modular workshop prefabrication. Being more precise, we recommend the use of ISO standard modulation of approximately 2.5 meters wide, which allow conventional road transport. These modules can be built with new materials such as wood or steel, but are also compatible with multimodal transport containers, allowing their reuse.
The modules will come from the factory with a high level of finishes in slabs, insulation, main walls, basic installations, but not necessarily in partitions or interior claddings, for example. The three-dimensional ISO modules can be combined, also acting as vertical support of the other elements, with forging systems and prefabricated closures, which opens the door to different possible combinations, between three-dimensional modules and two-dimensional elements.

In cases with difficult access three-dimensional modular systems will give way to two-dimensional systems, industrialized in a similar way to the previous one. Both in the mixed system and in systems based on two-dimensional panels, the elements are also prepared in workshop and come to site cut to size, coded and ready for placement. With this system the work times are shortened in a way comparable with the system of three-dimensional prefabricated modules.

This rigorous but open constructive criterion may be suitable for rapidly filling urban voids between party walls and, in particular, for constructing overhangs that add to existing constructions. In addition, its character of easily transportable elements has double advantage. It allows the construction to be able to begin off-site, in centralized facilities, while the formalities to obtain the licenses of work are realized or the work of preparation of the support and attacks of installations are developed. 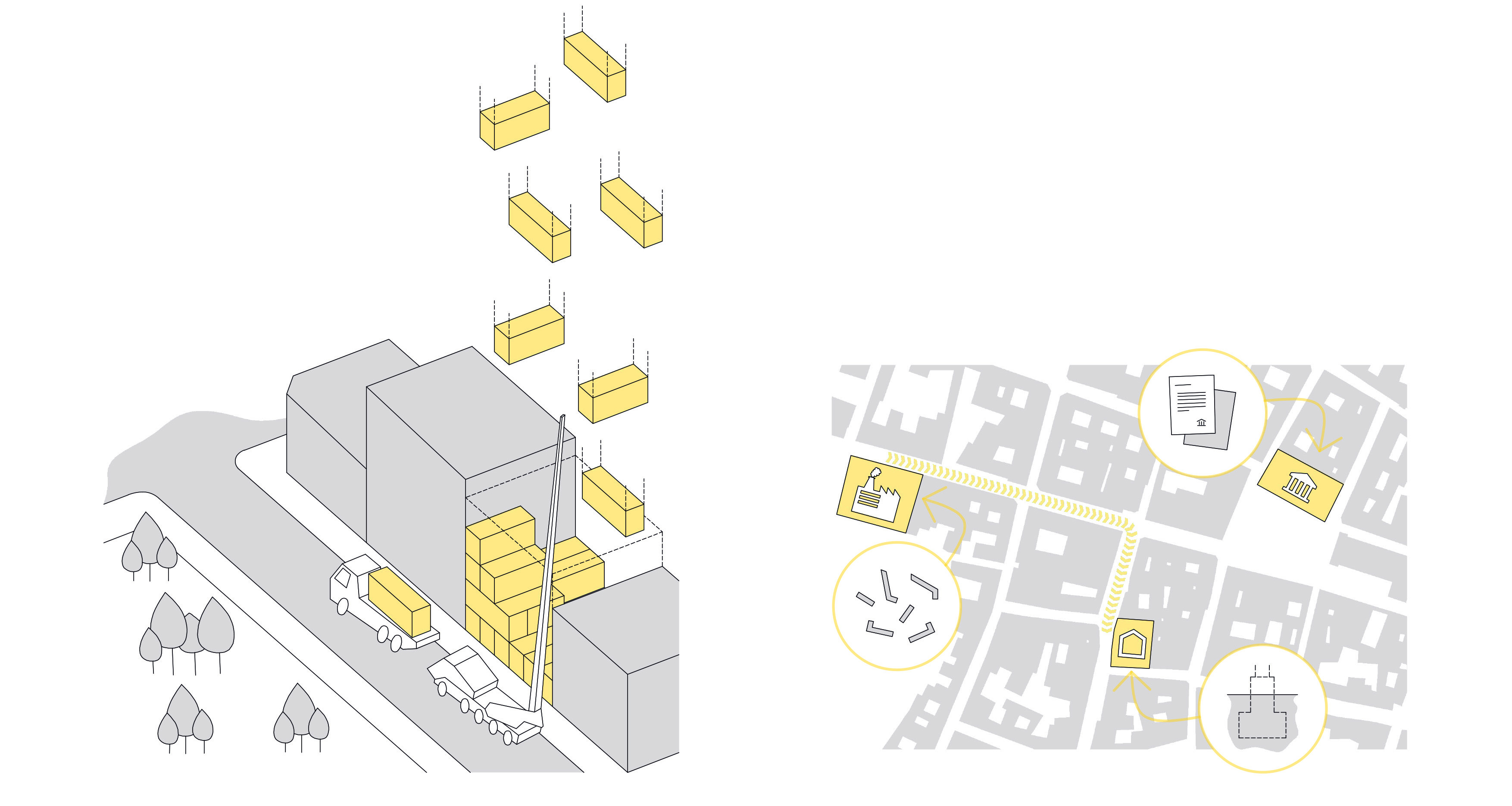 Despite being based on industrialized systems and with possibility of reversibility, ATRI's commitment is towards quality and energy efficiency, avoiding the exhibition of its modular nature (for example in cases where ISO containers are used), on the contrary, offering a repertoire of solutions of finishes in the exterior that dialogue with the city and in the interior inspire the domesticity.

To achieve this, the phases of installing and finishing at all times are fundamental, and are also an opportunity for the economy of small hands.

The implementation is structured in two moments:

-Installation of the prefabricated elements on the previously prepared support: The responsibility for this task rests with the industrial contractor, having to ensure, at a minimum, the dimensional compatibility, the anchoring systems and the connections to the main branches of installations.

-The finishing of the gray work by local professionals and small industrialists: The degree of completion of this phase has to leave sufficient margin to the next (the white work by the users), having some flexibility in the definition of the boundaries between phases.

The protagonists of the last phase are the inhabitants themselves, assisted by professionals in Do It Yourself (DIY) / Do it with others (DIWO) workshops. For this phase, there will be a list of possible materials and equipment (carpentry, kitchen furniture, cabinets, faucets, lighting, paintings, etc.), from which alternative solutions can be chosen and implemented by themselves with technical assistance coordinated by an optional direction.